I went to bed around 3 am last night.

These days, that's early for me.

So I woke up about 10, then did a morning writing exercise that I learned from author Luthor Cale in his book "33 Ways to Reboot Your Life." The exercise is to write three pages, first thing in the morning, writing whatever comes into your head.

All of that is to say that it was close to 11 when I fired up my cell phone.

I had a message from Russell Blaich.

Russell Blaich is senior inspector with  the Bureau of Building Inspection.

I met him in February when he was checking out 1015 N. Homewood Avenue, in preparation for tearing it down. I introduced myself, and when I said, "Save Race Street Committee," he recognized the name.

I will make a note in passing that deserves its own conversation: Every day, we generate reputation that spreads virally, beyond our perception, much less our control. It behooves us to do only that which we're willing to be famous for. Every day.

I believe this morning's phone call was not about 1015 N. Homewood, but about this house, 7154 Race Street. 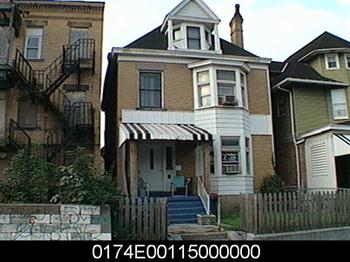 This house had not been condemned when I spoke with Paul Loy, and it is not part of Homewood Capital Partner's deal with Operation Better Block. But it has been condemned now, and it was taken by the City in October, and Russell Blaich has a job to do.

But at least he wants to talk to me. And I want to talk with him.

Which is unlikely to happen when I stay up until 3 am or later. You see, Mr. Blaich is out of his office by 9:30 every morning, because he spends most of his day in the field, looking at condemned buildings. So any conversation with him must happen before 9:30.

How stupid would it be for a house to get torn down because Elwin Green couldn't put himself to bed at a decent hour?

In order to change Homewood, I must change myself.

The Disappearance of Donald Trump
by Elwin Green | 2 comments