How to get arrested? Stand there.

Journalist Rossano Stewart (striped shirt) and schoolteacher Dennis Henderson (yellow shirt) in handcuffs after a police officer arrested them, according to Mr. Stewart, for obstructing the street.

UPDATE, 6/28/2013, 1:54 am - Mr. Henderson's cell phone video, video of Jerome Jackson. This is the final version of this story. New/additional information will go into a future story, as Homewood Nation continues coverage.)

You've heard of DWB - Driving While Black? Tonight a journalist and a schoolteacher found themselves in handcuffs - and the teacher ultimately landing behind bars - apparently for SWB: Standing While Black.

Rossano Stewart, a reporter-photographer for the New Pittsburgh Courier, and Dennis Henderson, a teacher at Manchester Academic Charter School, were both attending the Community Empowerment Association' meeting on implementing an Urban Agenda, held in CEA's auditorium. They stepped out of the meeting so that Mr. Stewart could interview Mr. Henderson, and Mr. Stewart asked for a business card. Mr. Henderson went to his car to retrieve one.

Minutes later, they were both in handcuffs.

As Mr. Stewart told it, he and Mr. Henderson were at Mr. Henderson's car, on the driver's side, when a police cruiser came by, coming so close to them that they had to lean back against the car. Mr. Stewart made a comment, and Officer Jonathan Gromek MADE A U-TURN to come back and ask if they had a problem with his driving.

As Officer Gromek got out and approached the men, Mr. Henderson began shooting video with his cell phone. But that didn't last long.

Here's Mr. Stewart's first account of the encounter, given minutes after he was released and Mr. Henderson had been taken away, under arrest:

He would wind up telling the story several more times before the evening was over.

I had interrupted Mr. Stewart and Mr. Henderson as they were on their way outside, because I wanted to doublecheck a couple of quotes with Mr. Henderson.

He had just spoken in the meeting, about preparing our young people for the future.

"One of the biggest things we need to do is to look long-term," he said. "More than anything, we need human capital in these neighborhoods."

He spoke about preparing Manchester students by taking some of them to Future City, a national competition in which middle-school students design model cities.

"We were the only all-black school" at the event, he said.

Having heard him say those things in the meeting, then having just spoken with him, made it even more of shock when I saw him handcuffs minutes later.

Most of us were still inside the building when the incident occurred. But Jerome Jackson, executive director of Operation Better Block Inc., was outside, and witnessed the last part of it (in his account, "Rashad" refers to CEA head Rashad Byrdsong; "Mr. Moses" refers to George Moses, who lives in North Point Breeze, but is involved in Homewood through his church, Bethany Baptist):

Mr. Jackson "got the rest of the people out" by coming back in and shouting that everyone in the building needed to come outside right now. We did, and that's when we saw the scene captured in the photo.

What the photo doesn't show is that there were as many as 14 police vehicles there (I counted 11, but others said 14), including a canine unit.

The entire crowd immediately went into a state of outrage, raising their voices and their cell phones: "Record all police activity in our community all the time!" "This is why we need our own agenda!"

After Mr. Henderson was taken away and Mr. Stewart freed, and after hearing Mr. Stewart's first account of the incident, we went back inside the building to talk about what to do. The group agreed that we needed to take some action tonight, rather than waiting until tomorrow. As we went back outside, preparing to leave, Councilman Ricky Burgess arrived. His staffer Marita Bradley, who was attending the meeting, had called him. 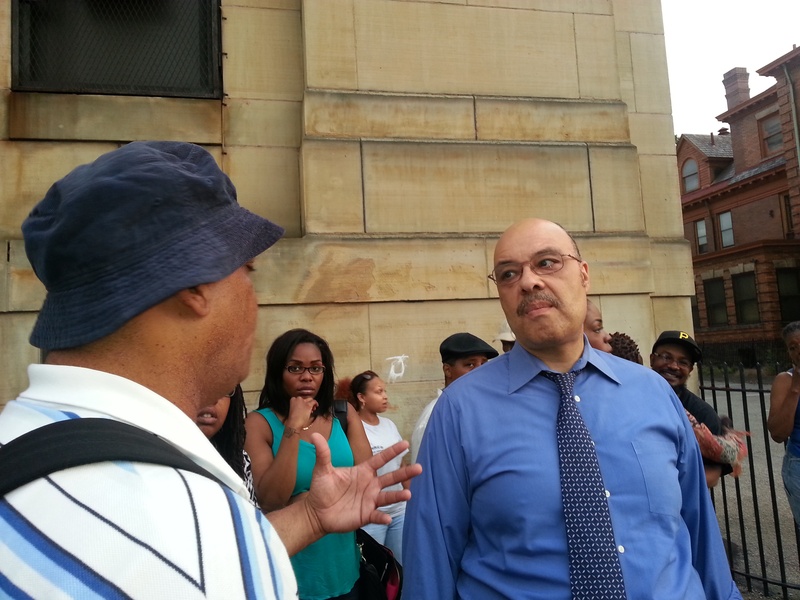 After Councilman Burgess heard Mr. Stewart's story, and after some discussion about where Mr. Henderson would likely be in custody, the group decided to go to Zone 5, and to let Councilman Burgess represent us there in speaking with police. A cameraman from KDKA arrived just in time to go over to Zone 5 with us, and did a preliminary interview with Mr. Stewart there. 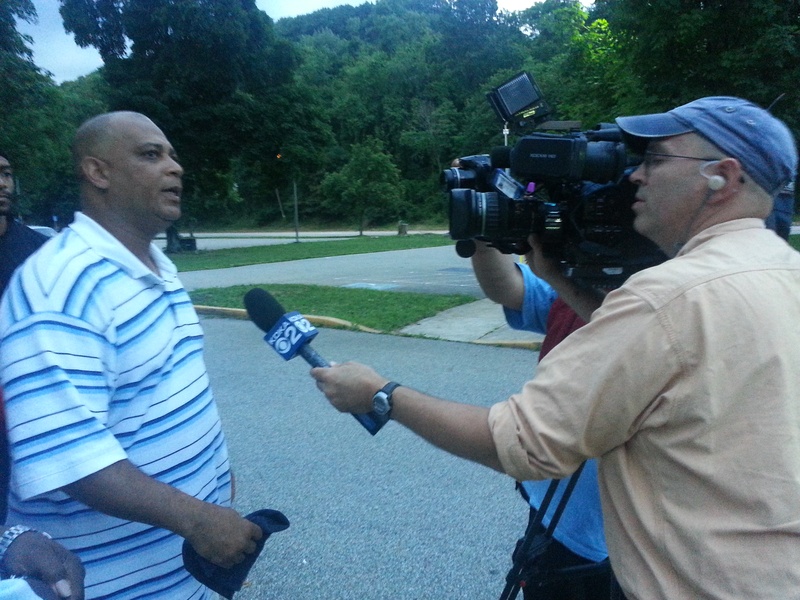 At Zone 5, Councilman Burgess spoke to the desk officer about why we were there, which was first of all, to show our concern for Mr. Henderson, and second to have some sort of conversation with someone in charge.

Phone calls were made, and the conversation turned out to be primarily between the Councilman and public safety director Michael Huss, who left a Squirrel Hill community meeting on gun violence to come over to Zone 5. Around 9:15, 9:20, the councilman and Mr. Huss emerged to face us and the TV cameras.

Burgess did most of the talking. He said that Mr. Henderson was being arraigned and would be released. The next step in the legal process is a hearing before a judge, which will be in 7 - 10 days. In the meantime, he, Mr. Huss and Rashad Byrdsong would arrange for a meeting - and here is where he had to speak carefully to the crowd - between us and the police.

I say he had to speak carefully because some people wanted to have an open community meeting. Burgess made the case for first having a meeting with those of us who had been part of this evening's event; then, if we so choose, having a larger community meeting.

I asked how we will know when Mr. Henderson's hearing is held so that we can support him. Councilman Burgess said he would let Mr. Byrdsong know so that he could inform us.

I'm going to ask every civic-minded person who is reading this - every person who has ever attended a meeting about how to improve their neighborhood or their community.

If you attended a community meeting and heard a school teacher speak eloquently about the need to prepare your community's young people for the future; if you saw a newspaper reporter whom you knew from their previous coverage of community events, taking notes and shooting photos; and then you went outside minutes later and saw them both on the ground in handcuffs, surrounded by a fleet of police cars...

What would you do?

UPDATED COMMENTARY: On reviewing KDKA's story, there's no mention of "protestors." I think I heard the term as part of a teaser. The question remains, for everyone - if this happened in your neighborhood, what would you do?

The video clip of Mr. Stewart is part of a longer clip that I started shooting right after I took the photo. It runs about 9 1/2 minutes and is now on Homewood Nation's YouTube channel. This clip includes the moment at which I felt the deepest emotion - at 5:14, as CEA head Rashad Byrdsong is speaking, you hear a little girl crying, because the experience of walking down the street has become terrifying for her.

Reply zekzmqmz
1:10 PM on June 30, 2022
stromectol tablets 3 mg how to get ivermectin from india cheap ivermectin