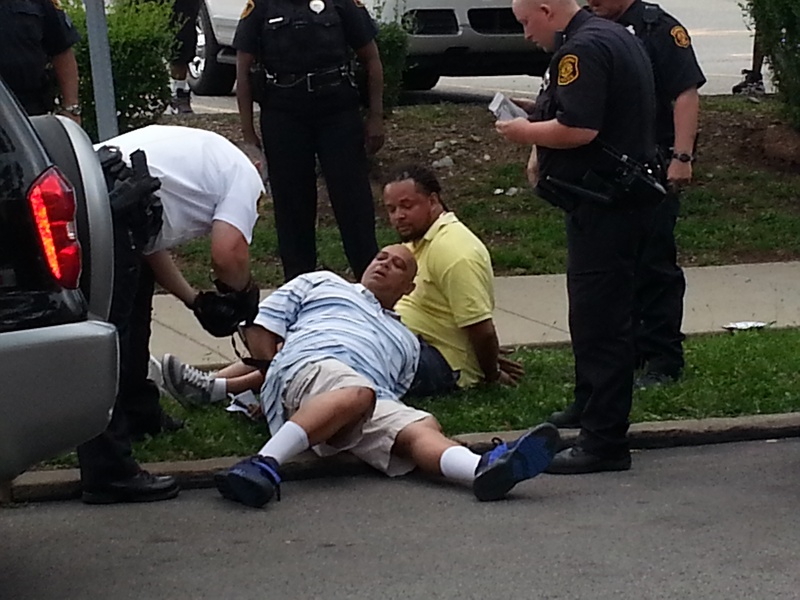 Teacher Dennis Henderson (center) was arrested Wednesday evening in an incident that many view as a case of racial profiling. This is his story.

I have dedicated my career to educating and mentoring young people to rise above their present situation, discover their talents, aspire to achieve dreams, embrace the Pittsburgh Promise and become productive members of our community.

I don’t do this alone. I am one of many individuals, organization, institutions, businesses and foundations throughout the area committed to closing the educational and economic gaps within our region.

Despite the resources and efforts of so many, there’s a large percentage of young people (black males at a disproportionate level) that don’t take advantage of the opportunities present in our community. Many feel disenfranchised with the concept that if you pull your pants up, work hard and conduct yourself in a respectful manner doors of opportunity will open for you.

On Wednesday, June 26th 2013, I was reintroduced to the emotion of feeling displaced and disenfranchised. By the actions of a uniformed officer, I was reminded that I am nothing in his eyes; that dignity and rights are not something I should expect to be honored by him; and that he can and will use the resources of the city to enforce his point of view.

After being handcuffed and thrown to the ground, I found myself surrounded by a team of uniformed men, women and canines wearing the emblem of the city. I was then escorted to the back of an armored wagon and transported to the Allegheny County Jail.

In the back of the wagon, repeatedly I retraced my steps from the community meeting to my vehicle wondering how I ended up in my present situation.

While leaving from a meeting with the Community Empowerment Association, I was approached in the lobby by Mr. Stewart, a freelance photographer of the Pittsburgh Courier. He wanted more information about an event he covered featuring my students that were honored at the George W. Tippins Awards Ceremony. Upon his request for a business card I told him they were in my vehicle and he followed me out to get one.

Due to the fact that Kelly is a narrow street, I opened the door to retrieve a couple business cards then shut the door and stood close to my vehicle as Mr. Stewart and I exchanged contact information.

From my left I spotted a patrol car crossing the intersection and picking up speed. Assuming that he was responding to a call, Mr. Stewart and I remained close to my vehicle as the patrol car continued to accelerate.

While approaching at approximately 40 MPH with no oncoming traffic in the opposing lane, the car veered ever slightly to the right, closing the proximity, forcing Mr. Stewart and me to lean and press up against my vehicle to avoid being struck.

After passing us, the patrol car began to decrease its speed. Shocked by the absurdity of the officers action, my immediate reaction was a yell of “Wow”… No sooner than I finished saying “Wow”, the patrol car then did an abrupt u-turn and pulled up to confront us.

A condescending, “Do you have a problem?” was our greeting from Officer Gromek. In a controlled voice, I told him, “I do have a problem and that his actions was unnecessary.” I informed him that I intended to file a complaint on him and requested his name and badge number. At that point, he exited his vehicle, approached us, asking for our IDs.

More agitated, Officer Gromek then ordered Mr. Stewart and me to walk over to the curb and off of the road. As we were walking he called for a back up unit. Concerned about his aggressive attitude and erratic behavior up to this point, I was not comfortable with his intentions so I informed him I was going to record our interaction on the mobile phone which I had been holding in my hand.

He got extremely angry at that point, demanding that I give him my phone. Then he attempted to snatch the phone from my hand. When I refused to let him snatch my phone, he told me to put my hands behind my back.

I then passed my phone to Mr. Stewart, asked him to continue recording, and put my hands behind my back. Officer Gromek then bypassed me and handcuffed Mr. Stewart. Mr. Stewart and I asked, "What did we do?" and "Why are you arresting us?" He gave no response, he simply cuffed Mr. Stewart and sat him down. I asked him again, “Why we under arrest?” No answer. I then instructed the individual observing to please request the attendees of the on going meeting to come outside.

Officer Gromek then twisted my arms, which were already positioned behind my back and tightly secured them against my lower back. I asked him again why was he arresting us. Still no answer.

He ordered me to sit on the ground. I was attempting to adjust my wrist to a more comfortable position so that I could sit without injuring myself, he again yelled at me to sit down. The pressure of the cuffs and the position he had my wrist contorted in the handcuffs did not permit me to move. Within 5 seconds of the initial twist and cuff, he told me, “If you don’t sit…I’m going to put you down.” And that he did, as he ended the sentence. I was slammed upon my back and shoulder with a leg sweep, then casually my head was shoved into the ground as he stood back up.

I was proud to see that the old JFK Grappler in me was still able to absorb a solid take down and keep a clear mind.

While laying on my back, with Officer Gromek looking over me, I asked again asked “What am I being arrested for?” It was at that point I finally saw him take a moment to think. His response: “Obstructing the road”. That gave me a laughable moment in the midst of everything going on.

Looking up to my left, I noticed there were citizens within the community observing from the parking lot of the YMCA and recording the actions of Officer Gromek. He began shouting at them to get back and to stop recording.

To my right, parked cars obstructed my view of the street while on my back, but I clearly heard a swarm of police cars pull in, then a dog barking followed by a great deal of commotion.

Within moments, a couple of new officers on the scene, assisted me with sitting up. At that time, Officer Gromek was telling another officer that he could let Mr. Stewart go. I was relieved. The officers near me asked what to do with me. He said “Take ‘em in”. These officers politely assisted me with getting back to my feet, escorted me to an armored van and made adjustments to the cuff on my left wrist so that I could comfortably sit.

Officer Gromek then escorted the van to the station. With his patrol car leading the way, I quickly realized I wasn’t going to a holding station in Zone 5. We had a traffic-free trip downtown complements of the efficient Port Authority express lane.

Upon exiting the transport vehicle, an officer assisting with the transport told me that they had my cell phone and keys in their possession. At this point Officer Gromek comes into view and I politely asked him if he could give them my driver license too. He told me he lost it.

That... and the agonizing process of being arraigned at the Allegheny Count Jail is another story.

What I learned from this…

Officer Gromek demonstrated that he has the power. The consequences of challenging his power: at his discretion he can cage and detain you.

Just an FYI… the staff at the Allegheny County Jail, does an exceptional job of making you feel like you’re already convicted of a crime.

As I sat in a holding cell for 8 hours, I was impressively disregarded, ignored and ordered around as needed by the CO’s. New to this experience, I was looking forward to the arraignment with the assumption that the judge would ask me my plea (not guilty) and send me home.

The more experienced guest of ACJ advised me that that wasn't not the case. I was told to expect a court date, an O.R. (a release on my own recognizance), and another 2 hour wait. They were a little off. I got a court date, a $5000 bail and waited an additional 4 hours.

After my arraignment, I was shuffled into another cell, this one packed well above capacity. After dozing on and off on a cement floor and steel benches an additional 4 hours, I was finally permitted to place a call to my wife to inform her of my whereabouts.

Despite the fact my pants were pulled up, I work hard and carry myself in a respectful manner… The only door opened to me by Officer Gromek was to the County Jail. If Officer Gromeck represents Pittsburgh’s finest… He reinforces the belief of many of our black youths… "We are not wanted, so why should we try?" I remember.

Fortunately, I’m 38. I’ve networked with numerous individuals, businesses, institutions and foundations of the city. I know that the actions of Officer Gromek do not represent Pittsburgh. We have a rich culture that does respect the struggles of life across all ethnicities. However, we there are still public servants (fairly young) that still harness conservative attitudes of the 1960’s.

I am a teacher.

I have dedicated my career to educating and mentoring young people to rise above their present situation, discover their talents, aspire to achieve dreams, embrace the Pittsburgh Promise and become productive members of our community.

Looking forward… I believe Pittsburgh can flourish and serve as the global definition of diverse community pride!

I have accepted the events of June 26th, 2013 as a lesson that I can deliver to my students.

The essential question I will ask them… “How can EVERY Pittsburgher live comfortably regardless of their economic status, hair, or skin color.”

I will then challenge them to apply their ideas.

Reply emaiddero
3:48 AM on September 1, 2021
ivermectin for rosacea

Reply Drondonse
6:40 PM on September 15, 2021
https://buyplaquenilcv.com/ - where can i buy plaquenil in tucson az