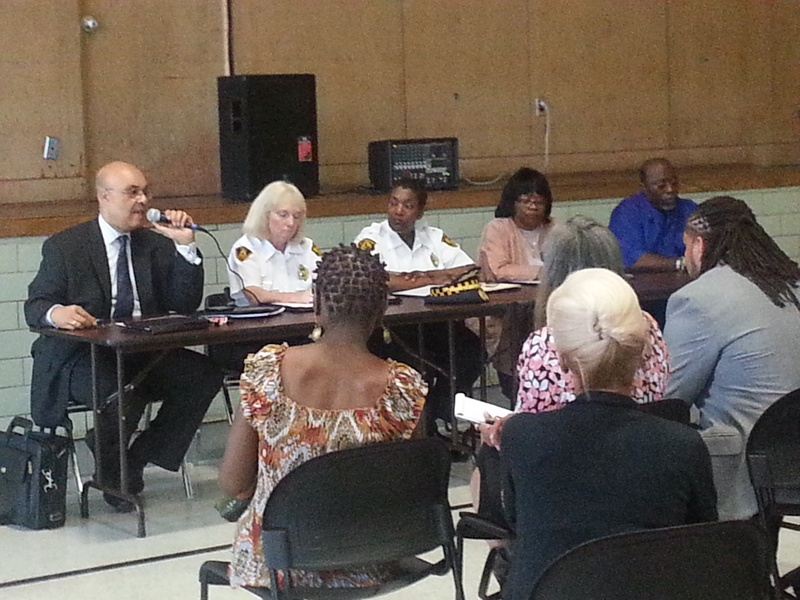 When teacher Dennis Henderson was arrested outside of a community meeting in Homewood last week, in an incident that also saw photojournalist Rossano Stewart being handcuffed and released, the group of citizens who went down to Zone 5 headquarters to inquire after Mr. Henderson ended the evening with an agreement to have two meetings in the wake of the incident - first, a closed meeting with ourselves and government and police officials; then an open community meeting.

Because it was a closed meeting, news teams from KDKA (Channel 2), WTAE (Channel 4) and WPXI (Channel 11) all had to wait outside and get comments from Councilman Ricky V. Burgess after the meeting. Tune in to any of those stations' late news for his remarks.

And because it was a closed meeting, I won't quote anyone. But I'll tell you the basic structure of the meeting, which was in three parts:

I. Comments from people who attended last Wednesday's meeting, to say what they saw, felt and thought.

II. Comments from the panel, in particular the public safety officials.

There were slight divergences, but we mostly stuck to that.

No major commitments were made, but there was consensus on at least a couple of points: that the charges against Mr. Henderson should be dropped; and that the community should show up in force at his hearing.

While I won't quote anyone else from tonight, I give myself permission to share what I said.

Addressing Chief McDonald and Commander Bryant, I told them that in Mr. Henderson's cell phone video, we hear Officer Gromek saying, "Stop playing with your phone," and that when Mr. Henderson asserts his right to record video, Officer Gromek denies that. I asked if a citizen does have the right to visually record an encounter with an officer. They acknowledged that that right exists.

Reply Venetta
4:10 AM on September 23, 2021
Heyy there! I know this is kinda off topic but I was
wondering which blog platform are you using for this site?I'm getting fed up of Wordpress because I've had problems with hackers and I'm looking at alternatibes for another platform.

I would be awesome if you could point me in the direction of a good platform.

Reply Comment-263699
4:24 AM on September 23, 2021
Hey there! I know this is kinda off topic but I was wndering
which blog platform are you using for this site? I'm getting fed upp of
Wordpress because I've had problems with hackers and I'm looking at
alternatives for another platform. Iwould be awesome if you could point me in the direction of
a good platform.
https://forum2.shareman.tv/viewtopic.php?f=21&t=77312
Comment-2110210 [Venetta] https://forum2.shareman.tv/viewtopic.php?f=21&t=77312

Reply cortisone steroids
6:05 PM on October 3, 2021
How To Get Zithromaz Without Prescription Over Night Shipping