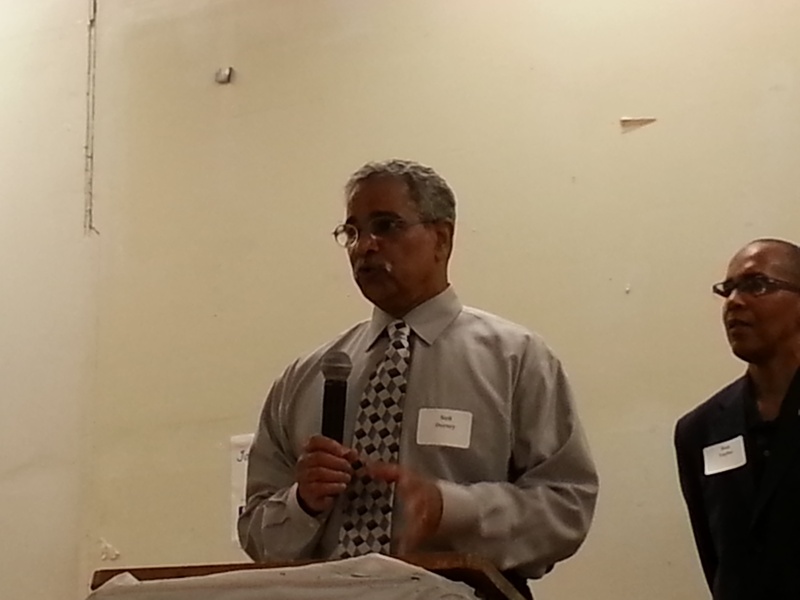 Neil Dorsey, owner of Dorsey's Records, which has been at the same location for 67 years, speaks at the Urban Innovations21 awards ceremony last night, as Dan Taylor, of PNCBank, listens.

The total was divided evenly into two categories of awardees - startup businesses and existing businesses.

In the startup category, the winners were

The existing businesses that received grants were

In order to participate in the grant competition, first announced in October,  business owners had to submit business plans after attending a series of classes that UI21 conducted at the Homewood Carnegie Library earlier this year.

In his opening remarks, UI21 Ceo and President Bill Generett paid tribute to the community of Homewood by noting that the agency's first grant competition, conducted for Hill District businesses, attracted some 30 participants. Based on that, he expected no more than 60 participants in the competition for Homewood-based businesses.

When some 80 business owners signed up, "That moment alone proved to us that there is a deep-seated entrepreneurial spirit in this community," he said.

The awards ceremony was preceded and followed by periods set aside for networking, during which some of the competition participants exhbited at tables.

In his acceptance speech, Neil Dorsey, whose business, Dorsey's Records, is in its third generation of family ownership, gave his fellow entrepreneurs a reality check that could weed out those who perservere from those who don't.

Reply Jomari Peterson
2:25 PM on July 19, 2013
I would like to add that Hajj Media is not just me. I am one of the Co-Founders. Walter Lewis is also a founder.