Further observations and questions regarding the Animal Rescue League project and residents' responses. Grab a cup of your beverage of choice; this is going to take a while:

In the citations below, TR = the Tribune-Review's story about the first meeting; PG1, PG2, PG3 = Post-Gazette stories following the first, second and third meetings; UMT = Urban Media Today's story, which came after the third meeting.

I) Altogether, the three P-G stories quote a total of eight people as residents: Howard Jones, Joseph Harris, Lance McCune, Donald Richards, David Peterson, Lucille Prater-Holiday, Tabansi Obsalo and the Rev. William Fuller. The Trib story quotes two, Karen Gilliam and William Young. The Urban Media Today story quotes four, but only names Lorna Dodswell - the other three are "another resident," "one of the few residents in favor" and "an elderly resident."

That's a total of 14. From my reading, I would place the residents quoted in the following categories regarding their view of ARL's relocation:

I place Ms. Dodswell and Rev. Fuller in the "unclear" category because my sense from their quotes is that they are not so much opposed to the project itself as they are frustrated about the process that has unfolded so far.

Do you agree with this assessment? How would you say the residents quoted stack up?

Howard Jones doesn't want to sell his house. He is not quoted as saying that he has any other issues with the project.

The stories mention a list of concerns that people have about how ARL will operate: they fear dog dander in their yards, and fear that dogs will befoul their lawns. They fear dogs running free - and dogs being walked.

I would expect ARL, whose entire livelihood is about managing animals, to demonstrate skill in preventing the animal-related problems residents fear. But maybe residents need some sort of demonstration in advance, even if it's just in the form of video, of how the League manages animals.

Finally, people mentioned noise and smell. The first P-G story notes, "In response, the Rescue League plans to put its offices and meeting rooms along the street to block noise from the animal shelters, which would face the East Busway."

Problem solved, right? Not quite. The second P-G story says, "They also worried that the nonprofit would renege on its promise to distance its animals from the street to diminish noise and smells."

That is a trust issue, pure and not so simple. Sometimes a promise is all you can give. It's up to the one who receives that promise to decide whether or not to believe it.

Does anyone else out there believe that many of Homewood's problems are either created or made worse by a lack of trust?

For those who do - how might we create more trust in Homewood?

Nowhere does the lack of trust show itself more strongly than in expressions of concern about the entire structure of how things are done - and why. I see four items in this category:

When someone says, "I feel it's just a way to push us out," (Gilliam, TR) it's hard to argue, not because she's correct, but because the assertion offers no point of entry for discussion. What does it even mean? Who's "us"? What is the factual basis for this feeling?

I'd bet good money that if asked to explain, Ms. Gilliam would, in short order, use the term, "gentrification," or a variant thereof.

Gentrification is one of the hottest topics going these days. New York magazine's February article asking, "Is Gentrification All Bad?", and Spike Lee's scathing rant in response (short version: "F*** yeah, it is!") launched a tide of commentary on both sides of the question.

But in Homewood, the topic is at least 30 years old. That is how long I have lived here, and for the entire time I've heard variations on, "White people are coming! They want to take our land! They want to push us out!" Which led me to say to my wife recently, "These are the slowest-assed white people in the world!"

I have never believed that what has happened elsewhere must happen here. I have always believed that we can write a different story, for at least two reasons: first, because Homewood has enough vacant land and vacant houses so that its population could double without anyone having to move anywhere. Second, because we're human beings with brains, and human beings with brains can do amazing things...but not when bound by limiting stories.

The idea that "they want to push us out" is so deeply entrenched that in the first public meeting about Homewood Station, an audience member labeled the project - a residence for low-income seniors being built on vacant land - as "gentrification."

Can ANY development happen in Homewood without someone calling it gentrification?

Better yet - how can development happen in Homewood without it being gentrification?

Having said that, Homewood has already lost people (and their votes) for decades, and it hasn't primarily been because of their houses being torn down.

"Others want to see the property developed into affordable housing or businesses they say the blight-stricken community desperately needs." (PG3)

How long have they wanted that, and what efforts have they made toward that, with what results?

"We're not saying we don't want projects. Just let us know about the projects. Don't let it be a surprise." (Fuller, PG3)

How would someone who wants to do a project in Homewood prevent the surprise? If someone wants to build something, wants to let the community know about it and wants to get community input early in the process....how would they do that?

III) Ms. Prater-Holiday, quoted twice in the P-G's second story, and once in Urban Media Today, lives in North Homewood, in the top half of cluster 2 in the map below, outside the zone of OBB's canvassing, which was the bottom half of cluster 3. This raises the question, "How and why did she even get in the mix?" 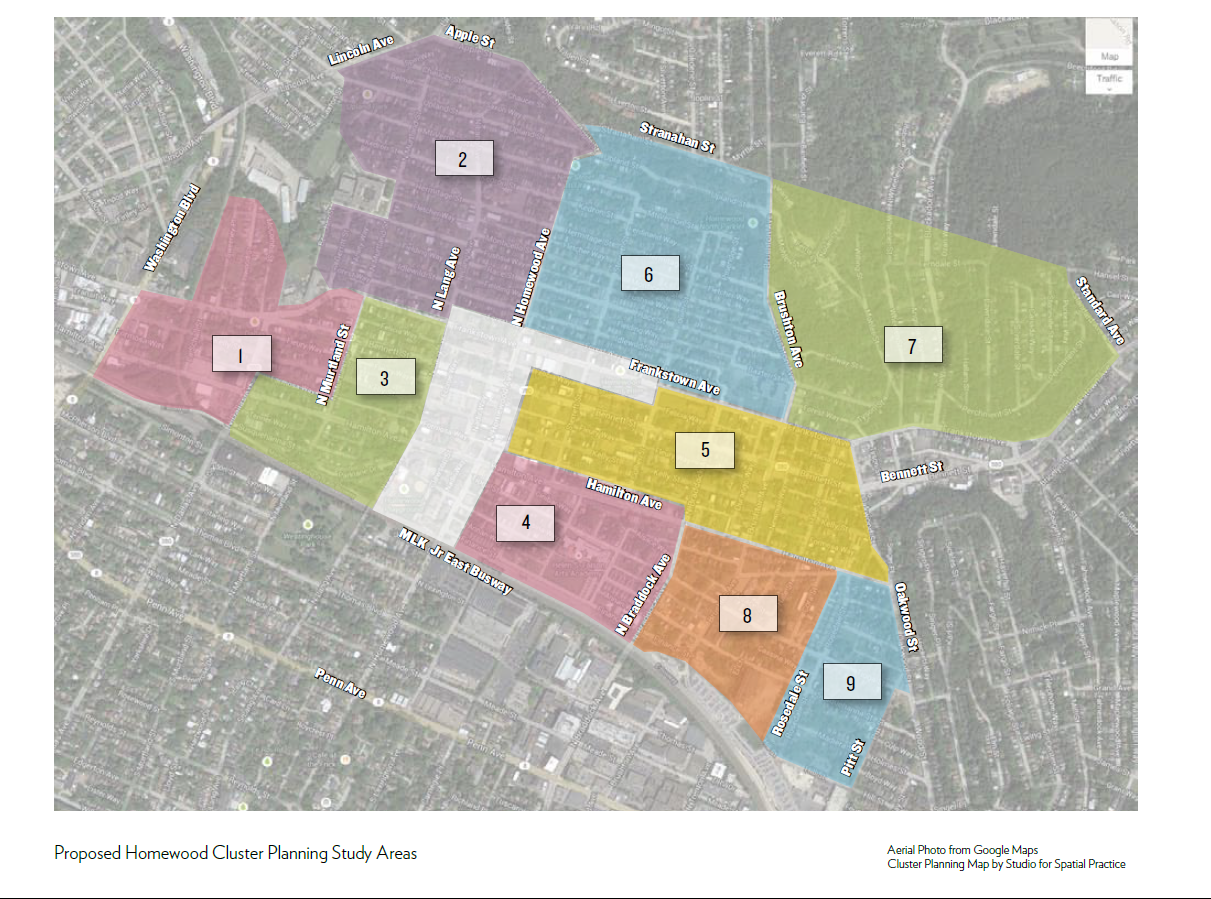 IV) In the second P-G story, Ms. Prater-Holiday seems to oppose, not just this project, but development generally:

"If you look around you, you'll see these developers are closing in on us from every entry," Homewood resident Lucille Holiday said. "We wake up one morning and all we have is development. Where's your neighbor who lived beside you for 20 years?"

Remember, this is in the second meeting, with about 50 attendees, after the first meeting drew 20. And the story also refers to other attendees in this meeting being "wary of development" and having a "distrust of developers." (There's that trust issue again.)

Ahem. The Animal Rescue League is not a developer.

V) Prior to this, Ms. Prater-Holiday opposed/condemned the Cafe 524 project (see fifth paragraph); Homewood Station; and the Bridging the Busway planning process - and positioned herself to oppose future projects by forming a resident group, Homewood Opposed to Outside Development (HOOD).

VI) The Trib story quotes Councilman Ricky V. Burgess: "It will be a regional attraction to spur new businesses, housing and restaurants."

I believe that ARL's 73 employees and 500 volunteers could support a restaurant or two, depending on the volunteers' presence. In fact, given that The Wheel Mill, one block away from the proposed ARL site, is already attracting 1,000 people a month to the area, I think a well-run restaurant could well be the best use of the building's retail space. But I think that as a general statement, saying the League's presence would spur other businesses is a stretch, and that saying it will spur new housing is a really big stretch.

VII) Speaking of employees, there's this, from the P-G's second story: "many at the meeting wondered whether the Rescue League, which largely relies on volunteers, would bring many jobs."

Why would it? The fact that a business is moving, even if it is moving to a larger space, does not mean that it is increasing its staffing.

And even if it does increase its staffing, that does not mean that residents surrounding its new location would be qualified for those positions.

I believe that if a business locates to a primarily residential area, it makes sense to prefer to hire locally, if only to make it easier for employees to get to work on time and to work late when needed, to help employees save money on transportation and parking and to reduce the enterprise's carbon footprint. But that does not translate into an obligation to hire locally. A business's primary obligation in that realm is to hire the best people it can afford.

VIII) Wow, I just hallucinated big-time. I just imagined a businessperson saying, "Hey, I hear the people in Homewood are amazing - let's put our business there so that they'll want to work for us!"

X) Given the concern for jobs, I find it odd that there's no mention of any mention of employing residents in the construction of ARL's new building. When the public meetings for Homewood Station were held, Community Empowerment Association CEO T. Rashad Byrdsong was both visible and verbal, and his agency wound up training people and placing them on the construction job site.

XI) The Trib story and the first P-G story both say that the project is to be funded in part by government grants. The Urban Media Today story says that is to be privately funded, without tax dollars. The presence of goverment money would impose hiring requirements on the building's construction.

XII) Councilman Burgess's term ends December 31, 2015. In Pittsburgh's the-primary-is-the-real-election political economy, that means that he will be re-elected, or not, about a year from now. So the game is on, not just for him, but for anyone planning to unseat him. This project will become campaign material.

MEMO TO SELF: Find out how many people in OBB's canvassing area for this project voted in the last election.

A. "I see my neighborhood shrinking instead of coming together." (Dodswell, UMT)

The ending of that sentence surprised me. I expected it to end with, "instead of growing." But then, I don't remember ever hearing anyone in Homewood express a concern for growing the community. Even when people say that they want the old Homewood back, I've not heard them say that they want to increase Homewood's population.

On the other hand, ARL executive director Dan Rossi is quoted as saying, "My hope is that Homewood will become a place that people want to move back in to." So the only person here who wants to grow the neighborhood - AS I DO - is the perceived interloper? Awkward.

Councilman Burgess is quoted in these stories as talking about housing, but not specifically about new people moving into Homewood.

B. "We are looking for people to have decent housing. I have consensus from my people that they do not want the Animal Rescue League here, but they could not be here." (Unnamed 1, UMT)

Decent housing is always a good thing. But what does that have to do with the ARL moving their headquarters? What's the connection?

XIII) Of all the quotes, in all five stories, I think this is the best:

"We've been bombarded into thinking people can come here and do whatever they want to do," Ms. Holiday said. "But that's not true. They can only do what we allow them to do. We're a decision-making community." (Prater-Holiday, PG2)

We ARE a decision-making community. Which leaves me with one question:

Given the results that we're getting, how can we improve our community decision-making process?

If you find value in this work, please help it to continue by using the button at the right to make a donation. Thanks!

Reply DuetReela
10:49 AM on November 10, 2021
ordering prednisone from canada

Reply Bramsxcxf
12:22 AM on January 18, 2022
cost tadalafil generic what is tadalafil