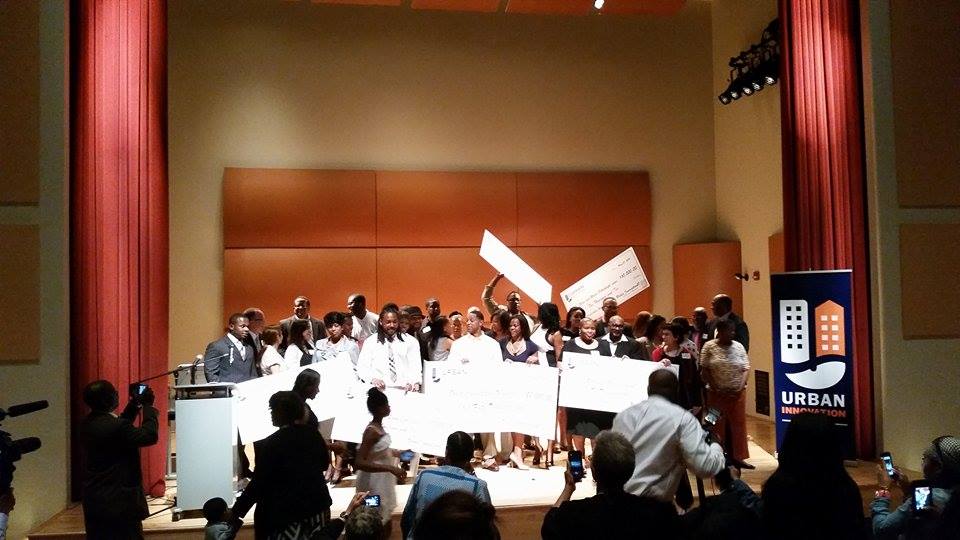 by Jose A. Diaz

The owners of 10 Homewood businesses have been awarded a total of $100,000 in grants by Urban Innovation21, a public-private partnership created to expand the benefits of Pittsburgh's economic resurgence to underserved communities.

Urban Innovation21 honored the winners of its “Inclusive Innovation” Small Business Grant Competition at a ceremony held May 21 in the Elsie H. Hillman Auditorium at the Kaufmann Center. The ceremony was the culmination of several months of rigorous trainings, workshops, and consultations designed to provide aid to entrepreneurs in developing and submitting the best possible business plans.

The ceremony also honored Hill District business owners who received a total of $50,000 in grants awarded through a similar competition.

Nearly 100 Homewood business owners expressed interest in the competition and training; ultimately, fifty submitted business plans, including Nina and Wahad Ansari, recipients of a $10,000 Start-Up Business Award. The brother-sister duo, of Homewood, will use the grant money to open up the Pittsburgh Barber College, a school where students will receive instruction from certified barbers for 1,250 hours of practical and theoretical training as a prerequisite to the Pennsylvania State Board Exam.

“With all the things that are highlighted [in Homewood] on the news, the bad things, I definitely think that we can use this as a training facility to help the young people in the community,” Ms. Ansari said. “This will provide training, provide an economic base, provide jobs, and provide them a chance to open their own shop if they’re interested.”

Yahru Hood-Wilkerson and Scott Johnson, recipients of a $5,000 Start-Up Business Award, spoke about their plans to open up the “Lounge-Ro-Mat”, a modern, high-efficiency laundromat with washers and dryers that meet industry standards for commercial use and which will include a lounge with Wi-Fi capabilities and a snack area.

“We have a lot of operating costs, so the money will go towards the start-up and giving us credibility for the other financiers that we approach,” Mr. Hood-Wilkerson said. “It’s going to be the best of both worlds. You get your chores done and at the same time, you get to chill and have leisure time. We want to alleviate that sense of [washing clothes] being a chore.”

A beaming Mr. Johnson disclosed that he and his partner have already picked out a site at the corner of Frankstown and N. Lang Avenues in Homewood.

William Generett, Jr., President and CEO of Urban Innovation21, remarked during the festivities that an economic transformation is happening in both the Hill and Homewood. Urban Innovation21’s goal, he added, is to ensure that “residents are prepared to take full advantage of the economic opportunities that present themselves because of this transformation.” Allegheny County Executive Rich Fitzgerald echoed Mr. Generett’s comments, saying that as more people continue to move to Pittsburgh, “[we have to] support entrepreneurs to serve that growing population.”

In both Homewood and the Hill District, the competitions awarded grants for start-up business and for existing business.

In Homewood, the start-up business winners were:

The winners in the existing business category were:

Reply angelica wilson
1:00 AM on January 29, 2021
Winning a business grant is the best achievement for an entrepreneur for their business idea. As a business owner myself I have been struggling to get a grant as well. As I am in my masterâs, I took help to ease my burden from online business dissertation topics UK as they had the best topics to kick start my dissertation. I hope now Iâll work towards my grant.
https://thedissertationhelp.co.uk/dissertation-topic/business-dis
sertation-topics/

Reply MasterPaper writers
2:32 AM on March 19, 2021
After I got my essay written I needed some revisions. Master Paper writers did all revisions and amendments free of cost. Thatâs what I call a studentâs best writing source online. Thanks a million!

Reply Monika Jacob
7:04 AM on October 28, 2021
Thank you so much for sharing this well explained and detailed post, all people deserve https://www.affordable-dissertation.co.uk/ such kinds of posts and you are the one who helps us.

Reply thisisemilyblunt
5:05 AM on August 11, 2022
they were finally free to reveal themselves. Without our busy American highways, there was 58 percent less roadkill https://www.voucherpro.co.uk/bodykind.com. Bird migrations during the pandemicâs spring, were less interrupted by airplanes.

Reply thisisemilyblunt
5:06 AM on August 11, 2022
they were finally free to reveal themselves. Without our busy American highways, there was 58 percent less roadkill https://www.voucherpro.co.uk/bodykind.com. Bird migrations during the pandemicâs spring, were less interrupted by airplanes.

Reply thisisemilyblunt
5:09 AM on August 11, 2022
they were finally free to reveal themselves. Without our busy American highways, there was 58 percent less roadkill https://www.voucherpro.co.uk/bodykind.com. Bird migrations during the pandemicâs spring, were less interrupted by airplanes.

Reply AlvenHelry
7:01 AM on September 5, 2022
With thanks, An abundance of advice!
couseworks can somebody write my essay