Progressive Dinner For A Progressing Neighborhood 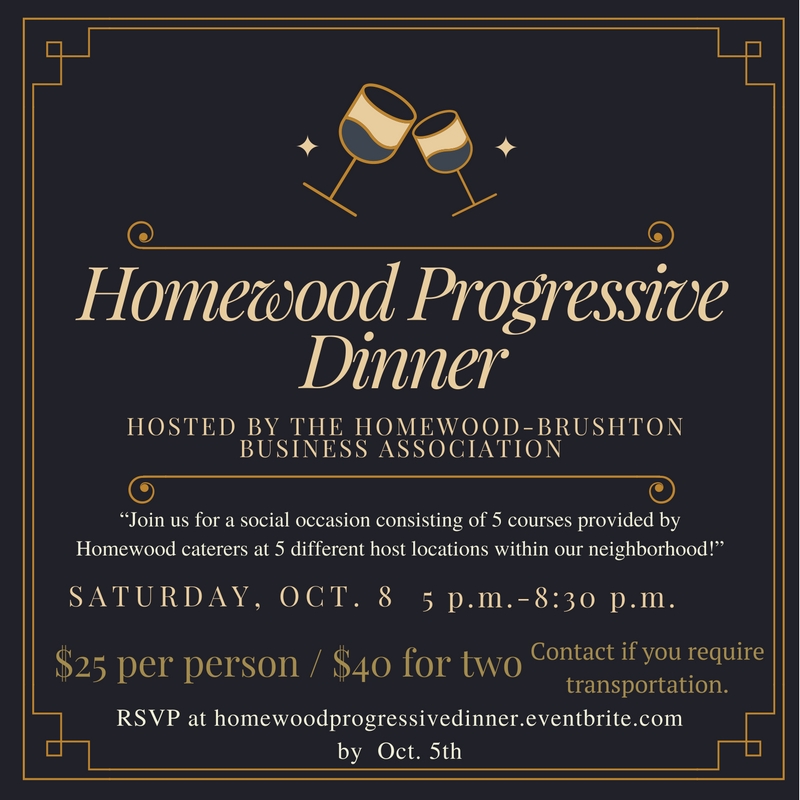 The Homewood Brushton Business Association is presenting an event this weekend that will give folks the opportunity to sample cuisine from Homewood caterers while visiting Homewood businesses and institutions.

The Homewood Progressive Dinner, being held Saturday evening, will offer a five course meal, with each course being served at a different location.

Libations will be offered at Knotzland, aka Artisan Bowtie Co., a startup in 7800 Susquehanna that recycles textile waste into unique neckwear.

From there, diners will move to Unity Consultants for appetizers. Their office is in the first floor of Homewood Station, the senior low-rise on Homewood Avenue near the Busway.

The entree will be served at the Afro-American Music Institute, at 7131 Hamilton Ave., which has provided music instruction for Homewood residents and others for more than 30 years.

Then it's down to The Wheel Mill, an indoor bike park at 6815 Hamilton Ave, for dessert.

Rounding out the pentathlon will be a nightcap at Lounge 7101 2ND Time Around, at 7101 Frankstown.

Besides being served at different Homewood businesses and agencies, the courses will each be prepared and served by a different provider.

Libations will be provided by Wine and Words Pittsburgh, headed by Erika Turner, who co-founded the company with her mother, Diane Turner. In 2014, Wine and Words received a $10,000 grant in Urban Innovation21' business grant competition.

Appetizers will be served by 7 Senses Catering & Event Services. Tia Staples' company is in the process of moving in to a retail space at 531 N. Homewood Ave, in Homewood Station, the senior low-rise on located near the Busway.

Dessert will come from Dana's Bakery. Dana's was already a Homewood institution when I moved here in 1984, so it's great to see them included.

HBBA board member Demi Kolke said the idea for the dinner arose while she and fellow board members Vernard Alexander, Marteen Garay, Henry Pyatt and Shimira Williams were debriefing after HBBA's first large event, a business expo held this summer.

They were eager to do another event, she said, and asked themselves, "What's a small, more achievable thing that we can do with the business community?"

Alexander brought up the idea of highlighting food businesses, and the group decided on the progressive dinner concept.

"We got the planning done that very first night," Kolke said.

For Harry Geyer, proprietor of The Wheel Mill, the decision to participate in the event was a no-brainer.

"We were approached by Demi," he said, "She asked if we would be interested in being a location, and I said, 'Yes, of course.'"

Part of what made that decision easy was how little it required - "just providing a location."

In return for that, the event "gives us a chance to get people to walk thorugh the park." Which might, just might, produce more business.

From where I sit, the Homewood Progressive Dinner looks like genius. Here's why.

There's nothing new about that. If you drive three or four miles north from Downtown on Route 65, you will come across a sign that is something of a local landmark.

The Bellevue Sign, for lack of a better name, is perched on the right at the intersection of Route 65 and Riverview Ave, which leads up into the borough. A bold rectangle proclaims the name, "BELLEVUE" (just like that, in all caps), and beneath it, three ovals declare three things to do in Bellevue: Live. Worship. Shop. 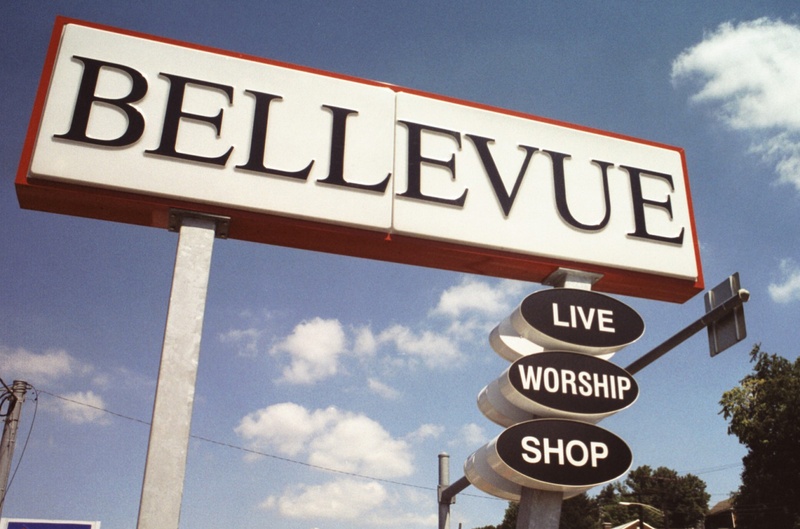 The sign is one of my favorite examples of marketing a community to the wider world. I've seen other signs, posted by developers, proclaiming that a development under construction would be a great place to live, work and play. I think I like the Bellevue sign better because Bellevue was surely already well-established when it went up (it looks 50s-ish), and because it's now been around awhile. It seems more like an honest description than merely a marketing pitch.

I've often thought about the Bellevue Sign, and others, when thinking about Homewood. If someone wanted to market Homewood by using verbs to describe things to do in Homewood, what verbs could they use?

"Homewood is a great place to live" will remain a hard sell until Homewood is known as safe, and its schools are known as excellent.

That leaves "Homewood is a great place to play." If "play" is understood to encompass the entire range of entertainment and recreation, then that is where I think Homewood can become most marketable most easily.

How? By becoming known as a location for entertaining events. Like a progressive dinner. Or the Harambee-Ujima Festival held in July, which included an arts and culture tour. Or the Wednesday afternoon concerts presented by The Harold Young Jazz Workshop Inc. on the steps of the Homewood Carnegie Library during the summer. Or the Sembene Arts and Film Festival, which screens films and hosts discussions, also at the library.

These events have already shown that people who might not live in Homewood, or work here, or worship here, will come here to play; that they will come here for arts and entertainment. What has not happened is an overall campaign to market, not just the individual events, but the neighborhood itself as the location for the events.

Such a campaign could make a big difference simply in terms of bringing more visitors to Homewood who have money to spend while they're here. Some of us in Homewood are worried about certain people moving into the neighborhood. But am I alone in wanting everyone to visit here long enough to spend money?

A print version of this piece appears in the Oct. 6 - 12 issue of Print, Pittsburgh's East End newspaper. Pick up your copy at Salik's Hardware, 603 N. Homewood Ave., then SUBSCRIBE  for more of Homewood Nation and other East End news!

Reply Lyons
12:48 AM on January 17, 2018
Your blog information is nice and friendly. This post is very helpful for me. Thank for post. Congrats on having such well managed site! It has good looks and contains informative content as well. Essay writing service reviews https://ukessayreviews.com has good skills, well knowledge, and the authors compose your papers quickly. These papers will best quality work so surely students will impress

Reply LukeBeins
1:02 PM on June 10, 2019
Luke Bryan is my favourite US singer. His strong voice takes me away from all problems of this planet and I start enjoy my life and listen songs created by his voice. Now the singer is going on a tour in 2019. The concerts scheduled for the whole 2019, up to the 12th of October. Tickets are available for all men and women with different income. If you are a country music lover as me, then you must visit at least one of his concert. All tour dates are available at the Luke Bryan concert schedule 2019. Open the website and make yourself familiar with all powerful Luke Bryan concerts in 2020!

Reply Chrisged
2:53 AM on June 14, 2019
Chris Stapleton is my favourite country singer. His powerful takes me away from all troubles of this planet and I can enjoy my life and listen songs created by his voice. Now he is on a All-American Road Show Tour started in May of 2019. The concerts scheduled for the whole 2019, up to the November 2. Tickets are available for all men and women with different income. If you love country music as mush as I, then you must visit at least one of his concert. All tour dates are available at the Chris Stapleton concert list 2019. Open the website and make yourself familiar with all powerful Chris Stapleton concerts in 2019!